Designing a Handoff with Figma

An approach to preparing a high-fidelity comp for development.

Check out the final Figma file

I'm designing for the following situation:

When a webpage has been designed in a tool and handed off to developers, I want the values (type, spacing, colors, sizes, etc.) to be easily parsed by developers while remaining accessible to designers for additional changes, so that both parties can effectively do their jobs.

Here are a few specific choices I made to arrive at the final handoff:

I'd like to briefly cover text styles and color styles.

Figma's color and text styles are great because they allow designers to focus on how elements should be styled while still maintaining a constraint on the number and kind of styles.

As the designer prepping this file for development, I created text styles and manually rearranged the list on the design tab.

A developer can take this list of styles and easily put it into a scale with CSS classes. Designers can refer to this list as a palette of options to choose from and create new styles when necessary.

Sometimes a component isn't necessary. For example, I created components for the alternating white and gray sections. I thought that this was a good idea since each has consistent spacing above their contents as well as a background color that I might want to change at a later time. 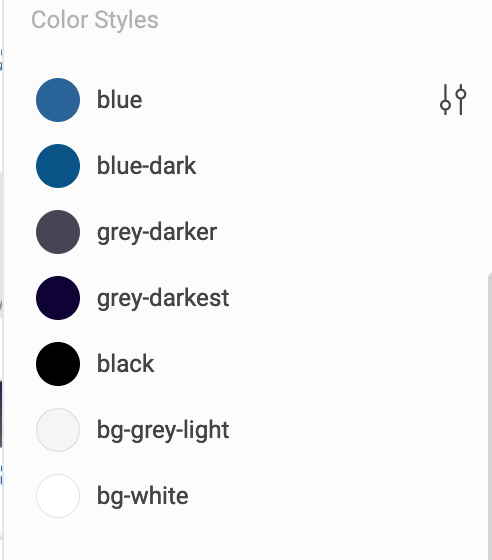 This exercise has been my way of thinking through a shift that I see in the CSS landscape towards utility-classes. A few big companies are seeing the benefits of utilities:

I’d love to see an example of a “web scale” site with a remotely sane stylesheet if anyone has one 👀 pic.twitter.com/SsC7thPVa1

In addition to that, here’s Heroku‘s infernal CSS framework documentation:https://t.co/JKFhILTnlo

...and an interview I did with Diana Mounter who leads design systems at GitHub:https://t.co/GJJQoXuuxO

I believe that the existing (Figma, Sketch, XD) and future design tools that adapt to this shift will be in the best position.

Figma's text and color styles are a great way to begin thinking in terms of utility classes when designing.